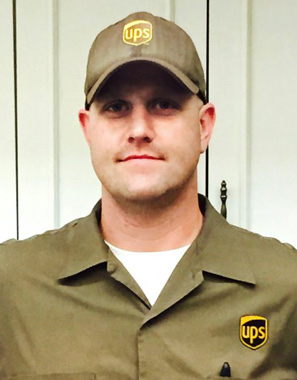 Kenny Ingram, 34, works in Dallas for the United Parcel Service (UPS). He’s one of the drivers that cheerfully delivers packages of all sizes to front doors throughout the Metroplex.

One day while on the job, he experienced a sharp pain in his lower back. The pain turned so debilitating that it became hard to walk and, at times, brought him to his knees.

He got time off from work and saw a chiropractor, who told Kenny that he’d pulled a muscle. But after three days and no improvement, Kenny made an appointment with a doctor within his workers comp network.

After looking at Kenny’s MRI, the doctor determined that he had suffered a massive bulging disc that would require permanent rods and back fusion. The diagnosis came as a shock, as treatment would mean his life would change significantly.

Kenny insisted on speaking with another in-network doctor to get a second opinion. He was told that he had a spinal tumor and was given the name of a doctor in Houston who could perform the surgery.

Kenny accepted the diagnosis but reasoned that by using his own insurance he might be able to find a qualified doctor closer to home. He searched the Internet looking for the best spinal tumor surgeon in Dallas. “I found one with outstanding credentials. He seemed perfect for what I needed,” Kenny recalled. “Not just one of the best in Dallas but one of the best in the country.”

Kenny found Dr. Richard H. Jackson, a neurosurgeon with Dallas Neurosurgical and Spine. Dr. Jackson took a fresh look at Kenny’s MRI. His years of diagnostic experience led him to conclude that Kenny had suffered a hematoma—a swelling of clotted blood. Dr. Jackson ordered another MRI to confirm his diagnosis was correct. What others doctors had mistaken for a pulled muscle, a bulging disc and spinal tumor was, in fact, a solid mass of clotted blood pressing on Kenny’s sciatic nerve.

Dr. Jackson told Kenny that surgery was unnecessary and that he would return to normal as the hematoma dissipated naturally. He advised Kenny to enter a rehab program to rebuild the muscle mass he’d lost from inactivity.

Today, out of rehab, Kenny Ingram is back to enjoying life. Back at work. Back to jogging to front doors with packages of all sizes. And doing so, pain free. “I can’t thank Dr. Jackson enough,” Kenny said.