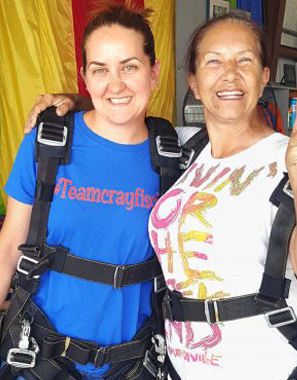 Barbie Fischbeck, 32, works as a massage therapist. She first found out she had scoliosis when she was 18, during an anatomy class.

“I never noticed it before because it didn’t cause me any pain – I didn’t go for treatment because I felt fine.”

Over the next few years, a series of small injuries made the scoliosis progressively worse, but it never became a significant problem. Then in her early twenties, she fractured a part of her back.

Barbie Fischbeck and her mom went skydiving on Mother’s Day.

“I went to see two surgeons, both of whom had terrible bedside manner. They told me they didn’t want to do scoliosis surgery because the curvature wasn’t severe enough.”

As a massage therapist, Barbie knew how to ease her pain – what worked and what didn’t. And life went on.

“Then about two years ago, I started experiencing more severe pain. I tried to ignore it, but eventually it got so bad that I ended up in the ER. They did a scan, which showed that my scoliosis was pressing down on my kidney. I was told, ‘You need to take care of this.”

“For years, I’d known that surgery was inevitable, but decided that I was going to hold out for as long as I could. Now I knew that time was here.

Barbie interviewed five doctors – all of them in Dallas ­– and got five different opinions on what to do.

“Dr. Taub was the last doctor I saw. He looked me over, watched the way I moved and sent me to have some more scans done. When they came back, he told me, ‘These aren’t your scans.’

“I’ve always had good posture, as well as an amazing range of motion. Most people didn’t even know I had scoliosis. My own grandmother didn’t know.”

Dr. Taub continued, “Seriously, you’re not in pain? Because looking at these scans, you should be in a lot of pain.’”

“I had a 56-degree big curve, a 36-degree small curve and a 9-point rotation – meaning the spine itself had rotated. What Dr. Taub wanted to do was different than the other doctors. They all wanted to fuse my spine from the back of my head to my hip, but Dr. Taub wanted to start at my shoulders and leave my neck free.

“Dr. Taub was focused on me and the quality of my life.”

“You’re young and your cervical spine is fine,’ Dr. Taub said. “If we fuse your neck you’ll lose a tremendous range of motion, which will hinder you the rest of your life. There’s no reason to do that.”

“The other doctors were much more focused on telling me how much my life was going to change after surgery. I told them that I run 5Ks and go to gym all the time, and they said, “Well, that’s not going to happen for you ever again.”

“Dr. Taub was focused on me and the quality of my life.

“When I did a follow-up with Dr. Taub, I brought my mother since she would be the one to take care of me. Dr. Taub talked with both of us, answered all our questions and afterward my mom said, ‘I trust that man to cut you open right now. He has a great plan and amazing bedside manner.’

The surgery was complex and took 16 hours. “I now have two rods and 32 screws in my back. I do not make it through TSA on the first pass. Ever,” she chuckled.

“The next day after surgery, Dr. Taub came by and told me how well everything had gone. The following day was my birthday and he brought me a cupcake to celebrate. On day three, he asked if I could get up and walk. Before he could grab the walker, I was halfway down the hall. When he caught up with me, he said, ‘You can go home now.’

“For me, it’s all about choosing the right surgeon. That’s the decision that makes all the difference in the world.”

“I admit I overdid it at first. I wanted so much to get back to my life that I pushed myself too hard. But after some physical therapy and another 30 days, I was off pain meds and feeling fine.

“Since then I’ve seen Dr. Taub periodically. Everything’s good and he’s cleared me to do whatever I feel physically able to do.

“I jumped off SkyJump in Las Vegas – it’s a controlled free-fall off a 108-story building. After that, I went skydiving with my mother on Mother’s Day. I asked him if could I go and he said, ‘No.’ And then, ‘No, no, no.’ We went anyway. Everything went fine. It felt great. I sent him pictures. “About the only thing I can’t do right now is run, and I’m working on that.

“I refer people to Dr. Taub all the time – both my friends and my patients that see me for medical massage treatments. I run into dozens of people who’ve had fusion surgery and are in massive amounts of pain. They don’t know my story, and some of them tell me that I don’t understand what they’re going through. But I do.

“For me, it’s all about choosing the right surgeon. That’s the decision that makes all the difference in the world.”