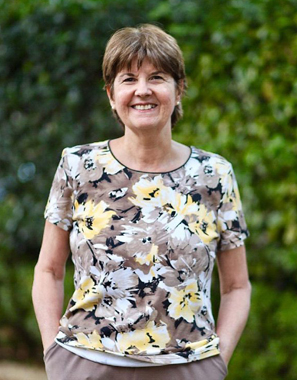 Debbie Ippolito is 63. She works as a full time, Registered Nurse in Tyler, Texas, doing clinical documentation out of her home since December 2016.

“Mine is an unusual case. I was not born with scoliosis or kyphosis. I was in a car accident 47 years ago. I remember it clearly. It was a summer morning in August 1970. My father was driving the family to the Jersey Shore from Poughkeepsie. I was in the back seat sitting behind by mother and my brother was next to me. We had just dropped the dog off at the vet. We never wore our seat belts but for some reason, that morning my father said as we left the vet, ‘Let’s put our belts on.’

“It had started to rain and there was a curve up ahead with a steep drop on both sides. The road had no shoulder, just guardrails. A car came around the corner and I suppose with the oil on the road mixed with the rain, their tires just couldn’t hold the curve.

“We were hit head on and ended up pinned against the guardrail. We were lucky we didn’t go over the cliff. If we hadn’t been wearing seat belts we would have gone through the windshield. Both cars were totaled. My father had to climb over the front seat into the back and crawl across me to get out of the car.”

The other driver walked away without a scratch, but all four members of Debbie’s family were injured. Debbie got the worst of it.

“I had a fractured lumbar vertebra. At the hospital, I became the orthopedic case of the month. I was 16 at the time, ready for my junior year in high school. I had to wear a plaster body cast for the next six months. Tutors came to the hospital to keep me up with my classes. I was released from the hospital in time for Halloween; my tutors came to the home until I went back to school in February. I wore a metal brace for another year.”

Despite the accident, Debbie’s life returned to normal. She was a cheerleader. She played tennis. She went on to graduate from nursing school in 1976 and worked full time as a Registered Nurse doing patient care in the hospital and clinic. And later, as a young woman, she delivered two children through natural childbirth. But gradually, the scoliosis began to have an impact.

“I stopped playing tennis in early 2000. In 2003, I had a CAT scan. It mostly revealed the arthritic changes that were happening with my spine. I didn’t do anything and continued to live pretty much a normal life – in part because I have a high tolerance for pain.

“Over the next few years, I could tell that I was getting more and more hunched over, and after a long day at work I would be very achy and stiff.

“I went to see a neurosurgeon in town about 3 or 4 years ago. He did an MRI and he told me that I had a 38-degree curve. He thought I should consider seeing an orthopedic surgeon here in town, but I was not comfortable with the idea. I felt that my back needed someone highly skilled, and I wanted it done right the first time.

“I let it go another year. One day, I ran into my neurosurgeon and he asked how I was doing. I was so bent over that my GI tract was getting more and more crunched. The compression was slowing my entire GI track down and causing constipation and bad acid reflux.

“I had another MRI done and he told me, ‘You’ve actually pushed your pelvis forward 13 centimeters out of line.’ This was a major posture shift. I was overcompensating just to keep myself standing at all.

“I was singing with a local choral group and my back would get so tired that I just wanted to sit down. The deformity was so debilitating. Dealing with everyday life was getting harder and harder.

“My kids live in the Dallas area. I live by myself in Tyler. I have a new grand baby. I knew I needed to do something. So I decided to see if I could find someone who could help me. I googled ‘neurosurgeons that specialize in scoliosis in the Dallas area’ and first thing that came up was Dr. Denning’s name. He was clearly an expert – top in his class and one his main areas of interest was treating scoliosis and spinal deformities. I read reviews and testimonials, and made my first appointment with him in the spring of 2017.

“I will tell you that, as nurse, I have a lot of experience with how rude some doctors can be. A lot of them are arrogant, but Dr. Denning was not. He had a quiet confidence about him, which I liked, and was kind and soft-spoken. When he talked to me, he pulled his chair right across from me, so we were face to face. He was so personable, unlike so many doctors that will stand on the other of the side room.

“When I went back for my second appointment, I asked him, ‘Is this something you can fix and not leave me paralyzed?’

Dr. Denning told me, “I feel confident I can fix this. As to how risky it is – I’ve removed malignant spinal masses that were far more complicated. That’s not to say your surgery isn’t a big deal, because it is, but I can definitely fix you.”

“He also said that if I didn’t do anything, it was going to progress to the point that I would definitely be in a wheelchair, and that I’d almost reached the point of no return.

“Because the surgery was so complex, Dr. Denning arranged for two surgeries, scheduled for May 31st and June 1st. On the first day, Dr. Denning did a frontal approach with a vascular surgeon to repair the lumbar fracture. On the second day, Dr. Denning worked with Dr. Taub to install all the hardware and fix the spinal deformity.

“I remember when I got my new brace – I think it was day seven – my daughter was there and she took a video of me walking the length of the hall with a nurse. She said, ‘Mom, you are so straight!’

“I went to back to Tyler for rehab. At first, I couldn’t straighten my left thigh because my muscles had contracted. Now that I was using them differently, I had pain in the pelvic joint and down the left leg. I’m a side sleeper, so any progress I made during the day would regress at night because I slept with my knees bent. I found laying on my back uncomfortable but it allowed me to stretch my legs at night, and that did the trick. I went from needing a rolling walker to using a cane and now I walk just fine.

“Living at home alone wasn’t easy. There were everyday things I needed to get done that I couldn’t do on my own, especially that first month. But so many people stepped up to help me and I’m so grateful.

“Right before all this started, my employer decided to reorganize and was looking to hire top nurses to work out of their homes. It ended up working out perfectly for me. I started out wearing my brace sitting at my computer desk to work, but now I don’t use it at all – it’s in a bag in my closet! Before the surgery, I would need to get up every hour and I would be stiff and sore in my pelvic girdle area, but that’s all gone.

“When people from work first saw me they said, ‘Oh my God!’ They were so used to seeing me all bent over and now I stood perfectly upright. I got three inches of height back. They couldn’t believe it.”

Debbie started singing again and she now drives herself to choir practice. She’s made it through two concerts with the Tyler Civic Chorale without the brace – standing to sing for up to an hour – without a problem.

“I got a copy for the operation report and after reading through it I realized how impressive the whole thing had been. Dr. Denning basically reconstructed my entire back.

“The last time I saw Dr. Denning I told him that I was just so thrilled with the outcome. I will brag on him until the end of the earth. And Morgan, too, who came to see me every day after surgery. Everyone on his staff was wonderful and so very kind. I can’t thank them enough.”